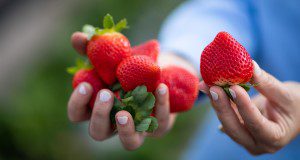 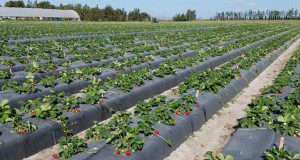 Florida strawberry growers primarily utilize cultivars developed by the UF/IFAS Strawberry Breeding Program. These cultivars are bred to provide the yield and quality traits needed by the Florida industry. Yet if a new cultivar has the traits that Florida growers need but pathogen-tested planting stock is not available to growers, the cultivar’s impact will be limited. The Clean Plant Program generates the pathogen-tested planting stock that nurseries and growers require. This new 5-page publication of the UF/IFAS Horticultural Sciences Department, written by Catalina Moyer, Natalia A. Peres, and Vance M. Whitaker, is intended to educate both the industry and the public on the importance of the Clean Plant Program and the methods used to produce planting stock of new cultivars.
https://edis.ifas.ufl.edu/hs1343 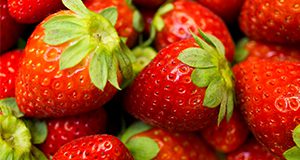 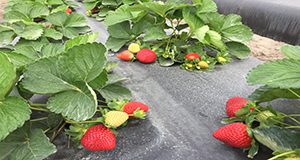 ‘Florida Beauty’ is a new strawberry cultivar released by the University of Florida and commercialized in 2017. This 4-page document describes the characteristics, performance, growth, and management of this cultivar. Written by Vance M. Whitaker, Natalia A. Peres, and Shinsuke Agehara and published by the UF/IFAS Horticultural Sciences Department, November 2017.
http://edis.ifas.ufl.edu/hs1307

Are Florida strawberries genetically engineered? The answer is no. No genetically engineered strawberry has been commercialized anywhere in the world. The UF/IFAS strawberry breeding program has been developing strawberry varieties for nearly 70 years, but these varieties are developed using a conventional breeding process of crossing and selection. This three-page fact sheet describes that process in greater detail. Written by Seonghee Lee, Young-Hee Noh, Sujeet Verma, and Vance M. Whitaker and published by the Horticultural Sciences Department.
http://edis.ifas.ufl.edu/hs1287

‘Florida127’ is a new strawberry cultivar released from the University of Florida in 2013, the fruit of which are eligible for marketing under the Sensation™ brand. It is a short-day plant adapted to annual, winter plasticulture growing systems. The plant is moderately compact, robust, and upright with long pedicels, making the fruit easy to harvest. This 4-page fact sheet provides information and recommendations based on several years of testing in field plots in west-central Florida. Comparisons are made to ‘Florida Radiance’ and ‘Strawberry Festival’ for disease resistance. Written by Vance M. Whitaker, Craig K. Chandler, and Natalia A. Peres, and published by the UF Department of Horticultural Sciences, October 2014. (Photo by Vance M. Whitaker)
http://edis.ifas.ufl.edu/hs1256

‘Florida Radiance’ is a strawberry cultivar released from UF/IFAS in 2008. As of 2012, it has become a major cultivar in Florida and other winter and early spring production regions worldwide. In all markets outside the United States and Canada, it is marketed as ‘Florida Fortuna’. In addition to commercial production, it has been tested for many years in field plots at the UF/IFAS Gulf Coast Research and Education Center in Wimauma and the Florida Strawberry Growers Association headquarters in Dover for disease, fruit, and plant traits. This 4-page fact sheet was written by Vance M. Whitaker, Craig K. Chandler, Bielinski M. Santos, and Natalia A. Peres, and published by the UF Department of Horticultural Sciences, June 2013.
http://edis.ifas.ufl.edu/hs400

Winterstar(TM) (‘FL 05-107’) is a new strawberry cultivar released from the University of Florida in 2011, originating from a 2005 cross between ‘Florida Radiance’ and ‘Earlibrite’. Data from several years of trials were used to generate this information and recommendations to help growers obtain optimal performance in West Central Florida. This 3-page fact sheet was written by Vance M. Whitaker, Craig K. Chandler, Bielinski M. Santos, and Natalia A. Peres , and published by the UF Department of Horticultural Sciences, April 2012.
http://edis.ifas.ufl.edu/hs1198

This 4-page fact sheet gives basic descriptions and suggested practices for University of Florida strawberry cultivars that are of commercial importance to the Florida strawberry industry. Descriptions are the result of research trials, field observations, and consultation with growers. They are specific to West Central Florida and may not be applicable to other regions where these cultivars are grown. Written by Vance M. Whitaker, Bielinski M. Santos, and Natalia A. Peres, and published by the UF Department of Horticultural Sciences, April 2012.
http://edis.ifas.ufl.edu/hs1199