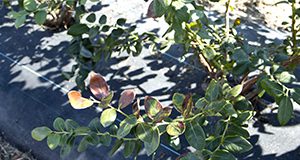 Bacterial wilt is a newly discovered disease of blueberry in Florida. Plants with bacterial wilt will show signs of water stress such as wilting and marginal leaf burn. The disease was initially confirmed on three farms in Florida. This three-page fact sheet describes the symptoms, occurrence, and management of bacterial wilt in blueberry. Written by Philip F. Harmon, Carrie Harmon, and Dave Norman and published by the Plant Pathology Department.
http://edis.ifas.ufl.edu/pp332 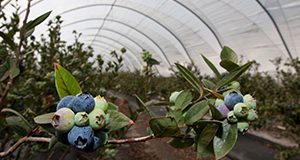 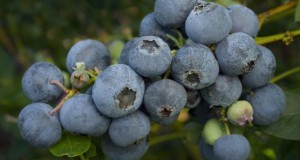 Spotted wing drosophila (SWD) is a tiny invasive fruit fly pest of small fruits. It has been found infesting fruits in Europe and North and South America. Since its first capture in California in 2008, SWD has established populations throughout the United States in over 47 states. This trifold brochure written by Lindsy Iglesias, Teresia W. Nyoike, and Oscar E. Liburd and published by the Entomology and Nematology Department describes how to identify and monitor these tiny pests and explains a few strategies to control them and limit the damage they cause to fruit crops.
http://edis.ifas.ufl.edu/in1098

The spotted wing drosophila is a recently discovered invasive species native to parts of East Asia. It was first detected in the continental United States in California in 2008 and in Hillsborough County, Florida in 2009. Since then, the spotted wing drosophila has spread to over 28 counties in Florida. SWD is polyphagous, meaning it feeds on many different host plants, including most thin-skinned fruits. The major hosts of concern to the Florida agriculture industry are blueberries, strawberries, blackberries and grapes. This 5-page fact sheet was written by Oscar E. Liburd and Lindsy E. Iglesias, and published by the UF Department of Entomology and Nematology, June 2013.
http://edis.ifas.ufl.edu/in998

Recommendations are based on information from the manufacturer’s label and performance data from research and Extension field tests. This 31-page pest management guide was adapted for Florida by Jeffrey G. Williamson, Philip F. Harmon, Oscar E. Liburd, and Peter Dittmar, from the Southeast Regional Blueberry Integrated Management Guide, and published by the UF Department of Horticultural Sciences, November 2012.
http://edis.ifas.ufl.edu/hs380

ENY858, a 3-page illustrated fact sheet by Elke Weibelzahl and Oscar E. Liburd, provides a guideline for the recognition and control of this mite that is an important pest of lowbush, highbush, and rabbiteye blueberries in Florida. Includes references. Published by the UF Department of Entomology and Nematology, January 2010.
http://edis.ifas.ufl.edu/in844