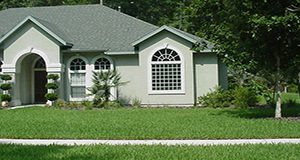 Relying on insecticides for southern chinch bug control raises turfgrass maintenance costs, increases the risk that insects will develop resistance to insecticides, and may damage the environment. Host-plant resistance is a relatively sustainable and environmentally sound option for management of this damaging insect pest.To develop new resistant varieties, plant materials must be screened for new sources of southern chinch bug resistance. Screening methods to measure host plant resistance of St. Augustinegrass to southern chinch bugs have measured nymphal and/or adult survival in so-called no-choice tests in which only the experimental plant materials were provided. There are four types of screening methods described in this 4-page fact sheet was written by Huangjun Lu and Ronald Cherry, and published by the UF Department of Entomology and Nematology, October 2014. (Photo credit: Long Ma, UF/IFAS Extension)
http://edis.ifas.ufl.edu/in1050

Mosaic disease of St. Augustinegrass was first reported in the 1960s in sugarcane producing areas of Palm Beach County, Florida. In the 10 years prior to 2013, less than 5 samples with mild symptoms were brought to the attention of the extension turfgrass pathologist. But in September 2013, an outbreak of the disease occurred in Pinellas County. Leaf symptoms included mosaic, but turned necrotic and the severe dieback that completely killed some infected lawns. In September 2014, lawns infected in 2013 and new lawns started dying in both Pinellas and Palm Beach Counties. Despite the similarity of symptoms to another St. Augustinegrass decline (SAD), as of November 2014, all samples have tested negative for SAD, and positive for presence of Sugarcane Mosaic Virus. This 3-page fact sheet was written by Phil Harmon, and published by the UF Department of Plant Pathology, November 2014.
http://edis.ifas.ufl.edu/pp313

Silicon (Si) is the second most common element on earth, but it is not considered an essential element for plant growth. However, a growing body of evidence has shown that Si can enhance plant resistance to insect pests. This 5-page fact sheet reports the results of a study to determine if silicon applications to St. Augustinegrass varieties increase the silicon in the plants and how this increased silicon affects development and survival of southern chinch bugs as well as development of plant diseases. Written by Alan L. Wright, Ron Cherry, Huangjun Lu, and Pamela Roberts, and published by the UF Department of Soil and Water Science, September 2013.
http://edis.ifas.ufl.edu/ss589

St. Augustinegrass is widely adapted to the warm, humid (subtropical) regions of the world. It is the most commonly used lawn grass throughout the state of Florida and can grow satisfactorily in a wide variety of soils. This revised 11-page fact sheet discusses the advantages and disadvantages of this turfgrass variety, cultivars available for lawn use in Florida, establishment, maintenance, pest management, and other problems. Written by L. E. Trenholm, J. L. Cisar, and J. B. Unruh, and published by the UF Department of Environmental Horticulture, April 2011.
http://edis.ifas.ufl.edu/lh010