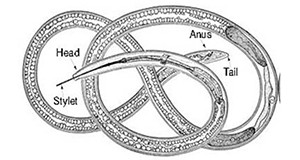 Dagger nematodes parasitize plants. They cause economic damage and death of host crops through feeding on the roots and by spreading viral mosaic and wilting diseases, but field studies have shown that some control measures targeting reduction in the population of dagger nematodes can be effective in controlling viral diseases in susceptible crops. This 7-page fact sheet was written by William K. Heve, William T. Crow, and Tesfamarian Mengistu, and published by the UF Department of Entomology and Nematology, June 2015.
http://edis.ifas.ufl.edu/in1097

Like many pest and disease problems, rat lungworm has been slowly spreading around the world. First described by Chen from rats in China, the medical significance of this parasite was overlooked until 1944 when it was found infecting humans in Taiwan. Even then, because the report was published in Japanese, its importance remained largely unknown. In 1955, Mackerras and Sandars found this nematode among rats in Brisbane, Australia, and described its life cycle, including the importance of its molluscan intermediate hosts. This 4-page fact sheet was written by John Capinera and Heather S. Walden, and published by the UF Department of Entomology and Nematology, September 2013.
http://edis.ifas.ufl.edu/in1007

Entomopathogenic nematodes are soft bodied, non-segmented roundworms that are obligate or sometimes facultative parasites of insects. They occur naturally in soil environments and locate their host in response to carbon dioxide, vibration, and other chemical cues. They fit nicely into integrated pest management programs because they are nontoxic to humans, specific to their target pests, and can be applied with standard pesticide equipment. This 4-page fact sheet was written by Nastaran Tofangsazie, Steven P. Arthurs, and Robin M. Giblin-Davis, and published by the UF Department of Entomology and Nematology, August 2012.
http://edis.ifas.ufl.edu/in944