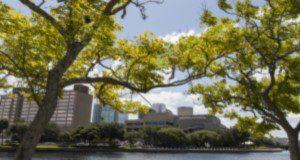 Urban tree diversity is important when attempting to create a healthy, beneficial, and resilient urban forest. Having a variety of trees can increase the aesthetic value for residents and create habitats for plants and animals. Some common street trees currently in the landscape are not site-appropriate and create infrastructure damage. By planting different types of trees in these locations, maintenance costs and infrastructure damage can be reduced and tree longevity increased. This new 4-page fact sheet is intended to provide urban foresters, arborists, landscape designers, and others in charge of tree planting with a process for introducing new species into the urban environment. Written by Deborah R. Hilbert, Andrew K. Koeser, and Robert J. Northrop, and published by the UF/IFAS Environmental Horticulture Department.
https://edis.ifas.ufl.edu/ep589

Paraná pine is a primitive-looking conifer valued for its unusual horizontal branching, interesting triangular-shaped needles, and neat, symmetrical form. The primitive appearance of this evergreen tree results from its resemblance to and relationship with an ancient group of Araucaria-related conifers that dominated forests more than 145 million years ago. This tree once covered vast areas in southern Brazil, Argentina and Paraguay. Native Americans harvest the seeds for food. It was an important timber tree for European settlers, and it was logged extensively through the 20th century. Now one of the rarest trees in Brazil, Paraná pine is considered critically endangered due to habitat loss and exploitation. This evergreen conifer grows too large for most residential situations, but is best used as an accent or conversation piece in large-scale landscapes. This 3-page fact sheet was written by Gary W. Knox, and published by the UF Department of Environmental Horticulture, November 2014.
http://edis.ifas.ufl.edu/ep509

Faber's Maple is unlike the maples familiar to most people, as it does not have the typical three- or five-lobed leaves. Instead, the leaves of Faber's maple are unlobed, slender, and very glossy. Additionally, most people know the maple as a deciduous tree, dropping its leaves in fall, whereas Faber's maple is evergreen. This 2-page fact sheet was written by Gary W. Knox, and published by the UF Department of Environmental Horticulture, December 2013.
http://edis.ifas.ufl.edu/ep490

Palms are often thought of as symbols of the tropics, but fortunately there are a number of palm species that grow in warm, temperate climates, such as that of Central Florida. This 8-page fact sheet was written by Timothy K. Broschat and James E. Davis, and published by the UF Department of Environmental Horticulture, January 2013.
http://edis.ifas.ufl.edu/ep020