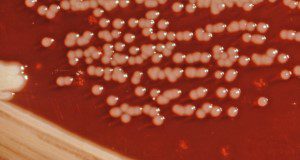 Yersiniosis is an infectious disease caused by the bacterium Yersinia and is typically associated with the consumption of contaminated food or liquids. Yersiniosis is characterized by common symptoms of gastroenteritis such as abdominal pain and mild fever. The bacterium is prevalent in the environment, enabling it to contaminate water and food systems. Outbreaks of yersiniosis have been associated with improperly pasteurized milk, ready-to-eat salad mix, oysters, and more commonly with consumption of undercooked meals containing pork. Yersiniosis incidents have been reported frequently in Northern Europe, Scandinavia, and Japan, and rarely in the United States. However, the reported low incidence of Yersinia in the US food supply may be underestimated due to the long incubation time and misdiagnosis of patients with Y. enterocolitica infections, along with the inability to identify the source of infection and the fact that only serious cases are reported. This 4-page major revision, written by Christopher Pabst, Jaysankar De, Aswathy Sreedharan, Correy Jones, and Keith R. Schneider and published by the UF/IFAS Food Science and Human Nutrition Department, also describes long-term effects and complications of yersiniosis, members of the population most at risk, and prevention methods.
http://edis.ifas.ufl.edu/fs193

Yersiniosis is an infectious disease caused by the consumption of food contaminated with the bacterium Yersinia. It is characterized by gastroenteritis, with diarrhea and/or vomiting, fever, abdominal pains, and skin rashes. Although outbreaks of yersiniosis are uncommon and sporadic in nature, foodborne outbreaks have been associated with consumption of contaminated food or water, and in places of high pork consumption. This 3-page fact sheet was written by Aswathy Sreedharan, Correy Jones, and Keith Schneider, and published by the UF Department of Food Science and Human Nutrition, June 2012. http://edis.ifas.ufl.edu/fs193