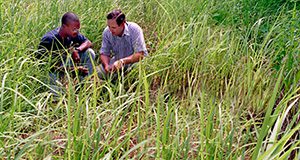 Cogongrass (Imperata cylindrica (L.) Beauv.) is a Southeast Asian warm-season perennial grass species that has spread to all continents except Antarctica. It is considered among the worst problematic weeds on a global scale. Control of cogongrass is difficult, especially in forests. This 6-page fact sheet written by Patrick J. Minogue, Brent V. Brodbeck, and James H. Miller and published by the UF/IFAS School of Forest Resources and Conservation presents recommendations for control strategies that will work in mixed pine-hardwood forests and pine forests.
http://edis.ifas.ufl.edu/fr411

Cogongrass is found on every continent and is considered a weedy pest in 73 countries. In the U.S., cogongrass is found primarily in the Southeast. It was accidentally introduced into Alabama in the early 1900s, and purposely introduced as a potential forage and soil stabilizer in Florida (and other states) in the 1930s and early 1940s. However, soon after investigations began it was realized that cogongrass could be a weedy pest. Since its introduction, cogongrass has spread to nearly every county in Florida. In some cases, it has completely taken over pastures so that it is the only species present. This is a common thread where cogongrass invades; it quickly displaces desirable species and requires intensive management. This 5-page fact sheet was written by B. A. Sellers, J. A. Ferrell, G. E. MacDonald, K. A. Langeland, and S. L. Flory, and published by the UF Department of Agronomy, August 2012.
http://edis.ifas.ufl.edu/wg202

FOR-191, a 3-page illustrated fact sheet by Rick Williams and Patrick J. Minogue, describes the biology and management strategies for this noxious weed native to warm regions of southeast Asia that can cause loss of productive forest areas, hinder forest activities and severely degrade wildlife habitat by replacing native plants. Includes references. Published by the UF School of Forest Resources and Conservation, May 2008.
http://edis.ifas.ufl.edu/FR252

FOR-185, a 4-page illustrated fact sheet by Rick Williams, presents the results of several experiments evaluating various herbicides used to control this invasive, nonnative plant in Florida. Includes references. Published by the UF School of Forest Resources and Conservation, May 2008.
http://edis.ifas.ufl.edu/FR240