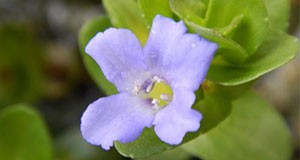 Lemon bacopa is a native aquatic and wetland plant that is a welcome inclusion in a variety of settings, including water gardens, aquatic ponds, and wetland restoration and mitigation sites. The species is broadly adapted and extremely common throughout Florida, and its perennial nature assures a stellar performance year after year. Although lemon bacopa can be weedy in some situations, it is most often considered a beneficial native plant that brings a number of desirable characteristics to almost any aquatic setting. This 3-page fact sheet was written by Lyn Gettys and Carl J. Della Torre III, and published by the UF Department of Agronomy, April 2015. (Photo: Lyn Gettys, UF/IFAS)
http://edis.ifas.ufl.edu/ag392

Rotala is a relative newcomer to Florida. Since it was first found in Coral Springs in 1996, it has established large, but mostly isolated, populations throughout the southern regions of Florida. It is especially problematic in Lee and Collier Counties and along the west coast. Extremely dense submersed populations and large thick mats dominate the surface of the water, greatly reducing ecosystem services, because oxygen level and light penetration are hampered. Because the rapid and vigorous growth of rotala inhibits water flow, the ability of infested canals to function properly in flood control systems is greatly hindered. Management of this aquatic weed is a major concern for resource managers. This 4-page fact sheet was written by Lyn A. Gettys and Carl J. Della Torre II, and published by the UF Department of Agronomy, April 2014.
http://edis.ifas.ufl.edu/ag381