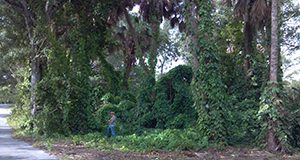 Air potato was introduced to Florida in 1905. By the 1980s, its vines were growing in thickets, waste areas, and hedges or fencerows in many parts of south and central Florida. By 1999, it was recognized as transforming plant communities by displacing native species, changing community structure and disrupting ecological functions. The air potato leaf beetle is a rather large, orange-red Asian leaf beetle. It feeds and develops only on air potato. The USDA-ARS Invasive Plant laboratory in Fort Lauderdale acquired this beetle from China and has begun an ambitious release program aimed at controlling air potato. This 3-page fact sheet was written by T. D. Center and W. A. Overholt, and published by the UF Department of Entomology and Nematology, October 2012.
http://edis.ifas.ufl.edu/in957