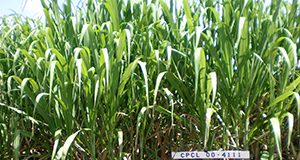 CPCL 97-2730 and CPCL 00-4111 are emerging sugarcane cultivars in Florida with rapid expansion in last couple of years. Both were ranked among the top 10 sugarcane cultivars in Florida in the 2015 Sugarcane Variety Census (VanWeelden et al. 2016) based on their total acreage. High biomass yield and better rust resistance greatly improve the chances of the cultivars’ adoption by growers. This fact sheet provides basic information and yield and disease information about CPCL 97-2730 and CPCL 00-4111 to assist growers in decision-making related to further expansion of these cultivars. Written by Hardev Sandhu and Wayne Davidson, and published by the UF/IFAS Agronomy Department, May 2017.
http://edis.ifas.ufl.edu/sc103