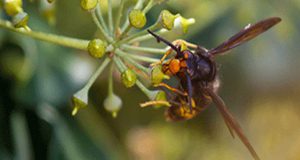 The yellow-legged hornet, Vespa velutina (Lepeletier), is a pest of concern outside of its native range. Vespa velutina is native to Southeast Asia and has invaded several regions in Europe, first appearing in France in 2004. As a generalist predator, they are a pest of honey bees and a major concern to many beekeepers. Vespa velutina has not been intercepted in North America, but it is believed to have high invasion potential. This 5-page fact sheet written by Krystal Ashman, Oliver Keller, and Cameron Jack and published by the UF/IFAS Entomology and Nematology Department describes the hornet and explains its live cycle, biology, and some of its predatory strategies.
https://edis.ifas.ufl.edu/in1282