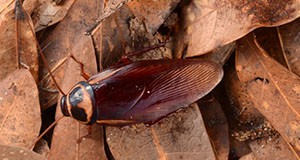 Australian cockroaches are the most common outdoor cockroach in southern Florida. Though they typically stay outdoors, Australian cockroaches may also venture inside and live among humans. This 4-page fact sheet covers the Australian cockroach’s distribution and habitat, biology, medical risks to humans, and management as a pest. Written by Shiyao Jiang and Phillip E. Kaufman, and published by the UF Department of Entomology and Nematology, April 2015.
http://edis.ifas.ufl.edu/in1088

This “peridomestic” organism can be found in structures near the home, such as storage areas, greenhouses, or shelter boxes for other structures such as water pumps. It is one of the species commonly referred to as palmetto bugs, and is also called a “stinkroach” or “skunk cockroach” due to its aromatic defensive secretions. This 6-page fact sheet was written by Christopher S. Bibbs and Rebecca W. Baldwin, and published by the UF Department of Entomology and Nematology, December 2011.
http://edis.ifas.ufl.edu/in915