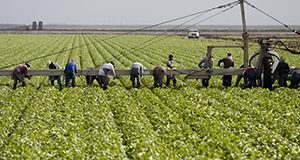 This 4-page fact sheet written by Zhengfei Guan, Berdikul Qushim, Feng Wu, and Alicia Whidden and published by the UF/IFAS Food and Resource Economics Department investigates the migration pattern of seasonal farmworkers based on a survey of strawberry harvesters conducted in 2016. In the survey, we asked workers where they were working and what crops they were working on before their current jobs. We also asked where they would migrate and what crops they would be working on after the strawberry harvest. We found that most workers were from Florida, Michigan, North Carolina, and California in that order, and that similar percentages of workers would migrate to these states after the job. Blueberries, tomatoes, and apples were the top three crops they were working on before and after their current jobs.
http://edis.ifas.ufl.edu/fe1040

The Immigration and Nationality Act (INA) of 1952 authorized a nonimmigrant visa category, known as H-2, for foreign agricultural and nonagricultural workers to come to the United States and perform temporary services. To protect against disruptions in the farm labor supply, many growers are turning to the H-2A program to import foreign guest workers. This 5-page fact sheet written by Berdikul Qushim, Zhengfei Guan, and Fritz M. Roka and published by the UF/IFAS Food and Resource Economics Department explains the H-2A program and briefly discusses immigration reform.
http://edis.ifas.ufl.edu/fe1029