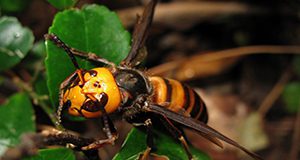 Vespa mandarinia Smith, commonly called the Asian giant hornet, is the largest hornet in the world. Its size and distinctive markings make it easily distinguishable from other Asian hornet species. Not only is the wasp occasionally life-threatening to humans, it can decimate a number of insect colonies, most notably wild and farmed honey bees. Vespa mandarinia is native to Japan and occurs in several countries in Asia. The first Vespa madarinia hornet detected in the United States was in Washington State in 2019. This 5-page fact sheet written by Caitlin Gill, Cameron Jack, and Andrea Lucky and published by the UF/IFAS Entomology and Nematology Department describes the hornet, its biology, its predatory strategies, and its medical significance. The fact sheet also provides some strategies for management of this dangerous and destructive hornet.
https://edis.ifas.ufl.edu/in1281 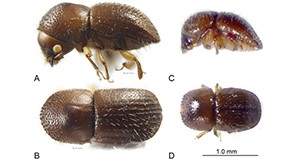 The tea shot-hole borer is an Asian ambrosia beetle introduced to Florida in the early 2000s. In Florida it does not have any known economic impact, but it is a serious pest of tea around the world and is one of the few ambrosia beetles that can infest healthy plants. The tea shot hole borer has a symbiotic relationships with the ambrosia fungus Fusarium ambrosium (Gadd & Loos), which is also a weak plant pathogen. This 4-page fact sheet includes diagnosis section with guidance for avoiding misidentification. Written by You Li, Andrea Lucky, and Jiri Hulcr, and published by the UF Department of Entomology and Nematology, June 2015.
http://edis.ifas.ufl.edu/in1090 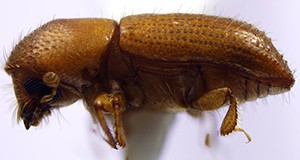 Xyleborus affinis is one of the most widespread and common ambrosia beetles in the world. It is also very common in Florida. Like other ambrosia beetles, it bores tunnels into the xylem of weakened, cut or injured trees and farms gardens of symbiotic fungus for food. Females lay eggs in the fungus-lined galleries and larvae feed exclusively on the fungi. Recent studies have shown that Xyleborus affinis can vector the fungus responsible for laurel wilt disease, which is lethal to numerous species of trees in the Lauraceae family. This 5-page fact sheet was written by Lanette Sobel, Andrea Lucky, and Jiri Hulcr, and published by the UF Department of Entomology and Nematology, June 2015. (Photo credit: Juri Hulcr, UF/IFAS)
http://edis.ifas.ufl.edu/in1094

The pavement ant is one of the most commonly encountered ants in the United States. Since first introduced from Europe at the beginning of the nineteenth century, the ant has become well established and is prevalent in urban areas in the northern U.S. and parts of Canada. However, the extent of their invasiveness and severity as a pest is not well characterized. This 5-page fact sheet was written by Tyler Vitone and Andrea Lucky, and published by the UF Department of Entomology and Nematology, September 2014.
http://edis.ifas.ufl.edu/in1047

This species of Cotesia has been widely used as a model system in insect physiology. It has also been used to examine insect learning in host-parasitoid-plant interactions. It is an important natural enemy of the tobacco hornworm, a detrimental pest species that feeds on many plants in the Solanaceae (tobacco, pepper, tomato, etc.) family. This 5-page fact sheet was written by Christopher D. Crockett, Andrea Lucky, Oscar E. Liburd, and Karen M. Kester, and published by the UF Department of Entomology and Nematology, July 2014.
http://edis.ifas.ufl.edu/in1042