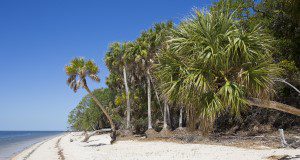 Florida is considered by some to be the lightning capital of the world. Florida has on average 3,500 cloud-to-ground lightning strikes per day and 1.2 million strikes per year. Given so many strikes, the probability of damage to certain palms is significant. Coconut palms, royal palms, and Washington palms are particularly vulnerable due to their great heights, but other tall palms may be equally susceptible. This new 6-page publication of the UF/IFAS Environmental Horticulture Department describes and includes many helpful photos of symptoms of lightning damage as well as lightning protection systems. Written by Stephen H. Brown, Douglas Caldwell, and Ralph Mitchell.
https://edis.ifas.ufl.edu/ep598