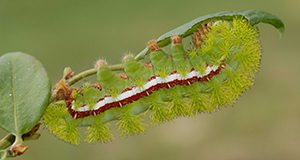 Wasp and bee stings are familiar to most people, but some might be surprised to learn that several caterpillars can also sting. Unlike wasps and bees with stingers, these caterpillars have barbed hairs that break off the caterpillar when it brushes against something. The hairs embed in skin and cause sudden or gradually building pain. The severity of a caterpillar sting varies based on the person and number of spines in the skin. Many stinging caterpillars also release a toxin on contact, which may cause health problems for some people. This 4-page fact sheet written by Rebecca Perry and Adam Dale and published by the UF/IFAS Department of Entomology and Nematology describes several stinging caterpillars commonly found throughout the southeastern United States.
https://edis.ifas.ufl.edu/in014