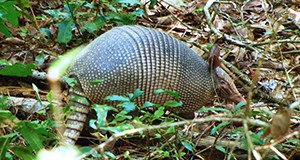 Worldwide, 250,000 new cases of leprosy are reported each year, and in the United States, approximately 150 new cases of leprosy are diagnosed each year. Also known as Hansen’s disease, leprosy (Mycobacterium leprae) is a bacterial disease that infects the skin and nerves, causing disfiguring skin sores, nerve damage, and occasionally lung damage if left untreated. Leprosy is spread between humans via respiratory droplets when people sneeze or cough. In the southeast United States, handling armadillos is thought to be the source of many infections. This 4-page fact sheet written by Shannon P. Moore and Samantha M. Wisely and published by the Wildlife Ecology and Conservation Department describes the disease in humans and armadillos and explains how to avoid it and limit its spread.
http://edis.ifas.ufl.edu/uw408