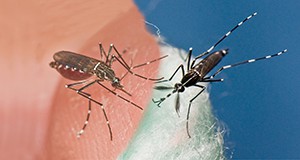 Zika is a mosquito-transmitted virus that has spread broadly in tropical regions and caused epidemics, especially in the past 8 to 9 years. In its native range in West Africa and Uganda, the Zika virus stays in the forest for the most part, and human infections are considered incidental and medically inconsequential. In 2015, however, Zika became a larger concern when a strain of the virus traced to outbreaks in French Polynesia emerged in northeastern Brazil. This strain provoked alarm because of increased incidence of microcephaly in babies born to Zika-infected mothers. Local transmission, mainly by the yellow fever mosquito Aedes aegypti, has now been documented in most tropical countries of the Americas but has not yet been detected in the continental United States. This 7-page fact sheet written by L. P. Lounibos, B. W. Alto, N. D. Burkett-Cadena, C. C. Lord, C. T. Smartt, C. R. Connelly, and J. R. Rey and published by the Department of Entomology and Nematology describes the Zika microbe, its mosquito hosts, and the disease it causes. A history of the virus and its migration are included, along with some details about the virus in the state of Florida and preventative measures people can take to avoid infection. The best way to avoid contracting Zika (and other mosquito-borne diseases) is not to get bitten in the first place. Take precautions to avoid mosquito bites.
http://edis.ifas.ufl.edu/in1120