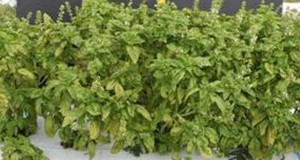 The yellowing of basil leaves could be an indication of the downy mildew of basil disease. This new destructive disease was first detected in south Florida in 2007 and has since spread to at least 42 states in the United States as well as many countries throughout Europe and Africa. This three-page fact sheet describes downy mildew of basil, including its symptoms and ways to control the disease. Written by Shouan Zhang, Jaimin S. Patel, Zelalem Mersha, Pamela D. Roberts, and Richard Raid, and published by the Plant Pathology Department.
http://edis.ifas.ufl.edu/pp271

PP271, a 3-page illustrated fact sheet by Shouan Zhang, Pamela D. Roberts, and Richard Raid, describes this new destructive disease that results in yellowing and cupping of the leaves of basil and ornamental plants related to it — distribution, symptoms, and control. Published by the UF Department of Plant Pathology, September 2009.
http://edis.ifas.ufl.edu/PP271