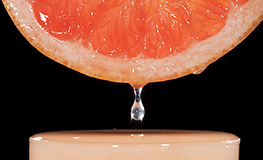 According to the Foreign Agricultural Service of the United States Department of Agriculture, worldwide consumption of fresh grapefruit in 2014/15 increased from 4.2 million to 5.2 million metric tons. China, which is the largest producer of grapefruit, was largely responsible for the increase. In South Korea, however, the state of Florida in the United States has traditionally dominated the grapefruit market. The South Korean grapefruit market has been increasing in recent years and is expected to keep growing. The industry in Florida now faces fierce competition from other suppliers with lower import prices and different harvest seasons. This 5-page fact sheet written by Yan Heng, Hyeyoung Kim, and Lisa House and published by the Food and Resource Economics Department aims to provide an overview of the grapefruit market in South Korea and evaluate the potential of this market for Florida fresh grapefruit producers.
http://edis.ifas.ufl.edu/fe1003