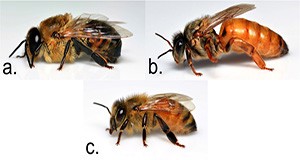 A honey bee colony is a superorganism, which means that together its members function like a single animal. Bees within a colony work together like the cells in a human body. They warm the colony in the winter by vibrating their wings to generate heat and cool it in the summer by ferrying in droplets of water and fanning air over them. Worker bees fan air into and out of the colony entrance in distinct inhalations and exhalations. Colonies reproduce by swarming to create new daughter colonies that in turn thermoregulate, breathe, and reproduce just as a single autonomous animal does. In three pages this fact sheet explains the intricate caste system and age-based division of labor that allows colonies of humankind’s best-loved pollinators to function and thrive. Written by Ashley N. Mortensen, Bryan Smith, and James D. Ellis and published by the Entomology and Nematology Department.
http://edis.ifas.ufl.edu/in1102